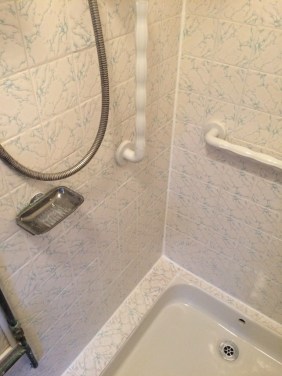 The photographs below are of a Ceramic Tiled Shower Cubicle installed in a retirement home in Maidenhead. The estimated installation for this bathroom is somewhere between twenty and thirty years and it was well overdue for an overhaul. First of all there was noticeable grout haze left on the tiles where it wasn’t polished off properly during installation and the second issue was the amount dirt and scum that had built up over the years. I suspect this was exacerbated by grout haze issue as it allowed the dirt to become trapped on the surface of the tile.

A strong mix of Tile Doctor Pro-Clean was decanted into a spray bottle and applied to the tile and grout allowing it to dwell for a while before being scrubbed in with a stiff hand brush. This action worked to break down the years of dirt and grime that had built-up in the grout lines and on the surface of the ceramic tiles. The tiles were then rinsed down with water and repeated where required until I was satisfied.

The next step was to tackle the grout haze which refers to the smears of grout left on a tile by the tiller after installation; this should have been polished off as it can be difficult to remove once the grout has set. To remove I knew I would need to use an acid so a strong mix of Tile Doctor Grout Clean-up was applied using a sprayer bottle and then scrubbed off with an abrasive black pad. In some areas where the grout was proving extremely stubborn I found leaving Tile Doctor Acid Gel for a longer period of time before scrubbing in was more affective.

The shower tile and grout was then given another rinse with water and I could see that although the tiles were now clean and the grout was much improved the grout still looked stained in places so I decided the best course of action would be to apply a white grout colourant to restore a uniform appearance. Before applying that however I applied fresh grout to a few area where old had crumbled away.

Normally I would recommend using a Grout Colourant Pre-Treater before colouring however in this case I felt that the combination of products that had already been scrubbed into the grout would of more than prepared the surface to accept the colourant.

I left the shower to dry over lunch and then on my return used a heat gun to ensure the grout was bone dry before applying the grout colourant. The colourant is actually very easy to apply and is simply painted onto the grout using a small brush making sure to wipe off any excess from the ceramic tile as you go along. The process makes a big difference to the look of a shower and the colourant provides a barrier over the grout making it much easier to clean in future.

Last step was to strip out the old silicone sealant between the shower wall and tray and replace with a new mould resistant sealant in white and to give the tile a buff with a white pad fitted to a handheld buffer to remove any remaining residue.

The shower cubicle was transformed and now looks as though it was recently installed. Certainly the customer was very pleased with the final result and left the following feedback.

“Dennis was the ultimate professional, prompt, polite and a pleasure to deal with, the transformation to the tiles in the shower is amazing, would have no hesitation in recommending him. A first class job”