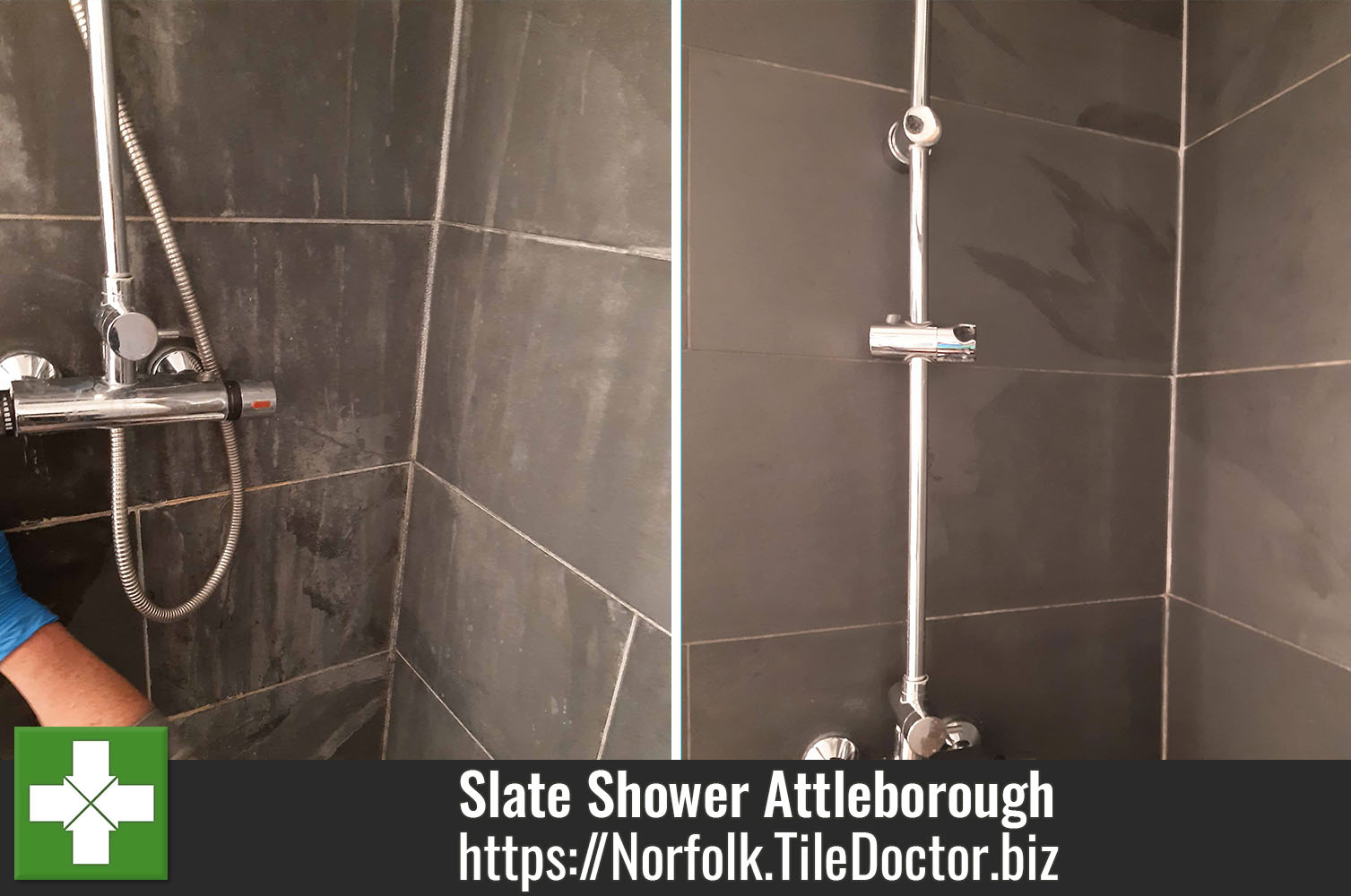 This customer from Attleborough had a new shower installed with the walls clad in beautiful Black Slate tiles. Unfortunately, the installation of the tiles didn’t go according to plan and the Slate became stained with white crusty patches. The staining was completely resistant to any type of cleaning or limescale removal product leaving what was meant to be a very opulent shower cubicle looking very un-inviting.

Despite numerous consultations with the contractor, they were unable to resolve the problem or offer any solution that would renovate the stone and make it look as originally intended. Desperate for a solution she searched the internet, discovered Tile Doctor and I was asked to take a look and see what could be done. Attleborough is only about ten miles from my base in Norwich so its wasn’t long before I was able to pop round.

After inspecting the installation, I ascertained that the problem here was two-fold. The primary problem was the installer and left a thin coating of grout on the surface of the Slate tiles. This is a common problem known in the trade as “grout haze” or “grout smears” and is usually removed afterwards by giving the tiles a good wipe down with a sponge. Clearly this wasn’t done sufficiently on this occasion. The second problem was the grout haze had provided the perfect moisture trap for the typical Norfolk hard water. Over a relatively short space of time, this trapped water had left hard limescale deposits which became firmly attached to the grout haze which, in turn, was firmly attached to the tile surfaces.

I mentioned earlier that my client had found that no amount of chemical cleaning could shift it. However, Tile Doctor products are designed for professional use and are far more powerful than those available in supermarkets and DIY stores. I also had available professional stripping and repolishing pads that can re-surface the stone so between the two I was confident of getting a good result and dramatically improving the condition of the shower cubicle walls.

The first job was to apply a liberal coat of Tile Doctor Acid Gel, which owing to its thick consistency, is the perfect choice for dissolving calcium-based contaminants on vertical surfaces. This coat was allowed to dwell on the tiles and in the grout lines for around thirty minutes with periodic agitation using a firm bristled grout and scrubbing brush. The solution was then rinsed off with clean water.

The process removed a considerable amount of the limescale but there was still a fair amount visible on the tiles particularly around the tap fittings. A further coat of Acid Gel was applied and again allowed to dwell for another thirty minutes before scrubbing vigorously using a black stripping pad fitted to a handheld Rotex random orbit polisher. After rinsing once again we found that all the limescale deposits and grout haze had been removed successfully.

The whole area was then dried off using a hot air gun and at this point the Slate had become pale and dry-looking after all the aggressive cleaning. Black slate is a type of oil stone which can often have its oil content stripped out by both chemical and physical cleaning.

I had anticipated this issue however and the solution was to replace the lost oil in the stone using Tile Doctor Stone Oil which is a resin-based pre-polish sealer. It’s formulated to restore the slate’s attractive deep Black colour, improve the surface texture and seal against water absorption. I allowed the oil to soak in for a few minutes and then wiped off all excess product remaining on the surface before leaving it alone to cure for a couple of hours.

Once the oil had cured, the water resistance was then further enhanced by the application of a coat of Tile Doctor Ultra-Seal which is a penetrating sealer designed for both interior and exterior applications. Finally, once the topcoat of Ultra-seal had dried, with some assistance from an industrial fan, the surface was buffed to a rich sheen using the Rotex polisher and a white nylon pad.

The client was very impressed by the finished result and hadn’t realised that her slate tiles actually had some flame-like pattern variation in their surface which had always been hidden before by the grout haze and limescale deposits.

For the aftercare of shower tiles, especially stone I recommend regularly spraying on a product called Tile Doctor Aqua-Pro which is a mild cleaner designed for use where the tiling has been sealed. A lot of tile cleaning products you find are simply too strong for use on sealed surfaces and can erode the sealer over time.