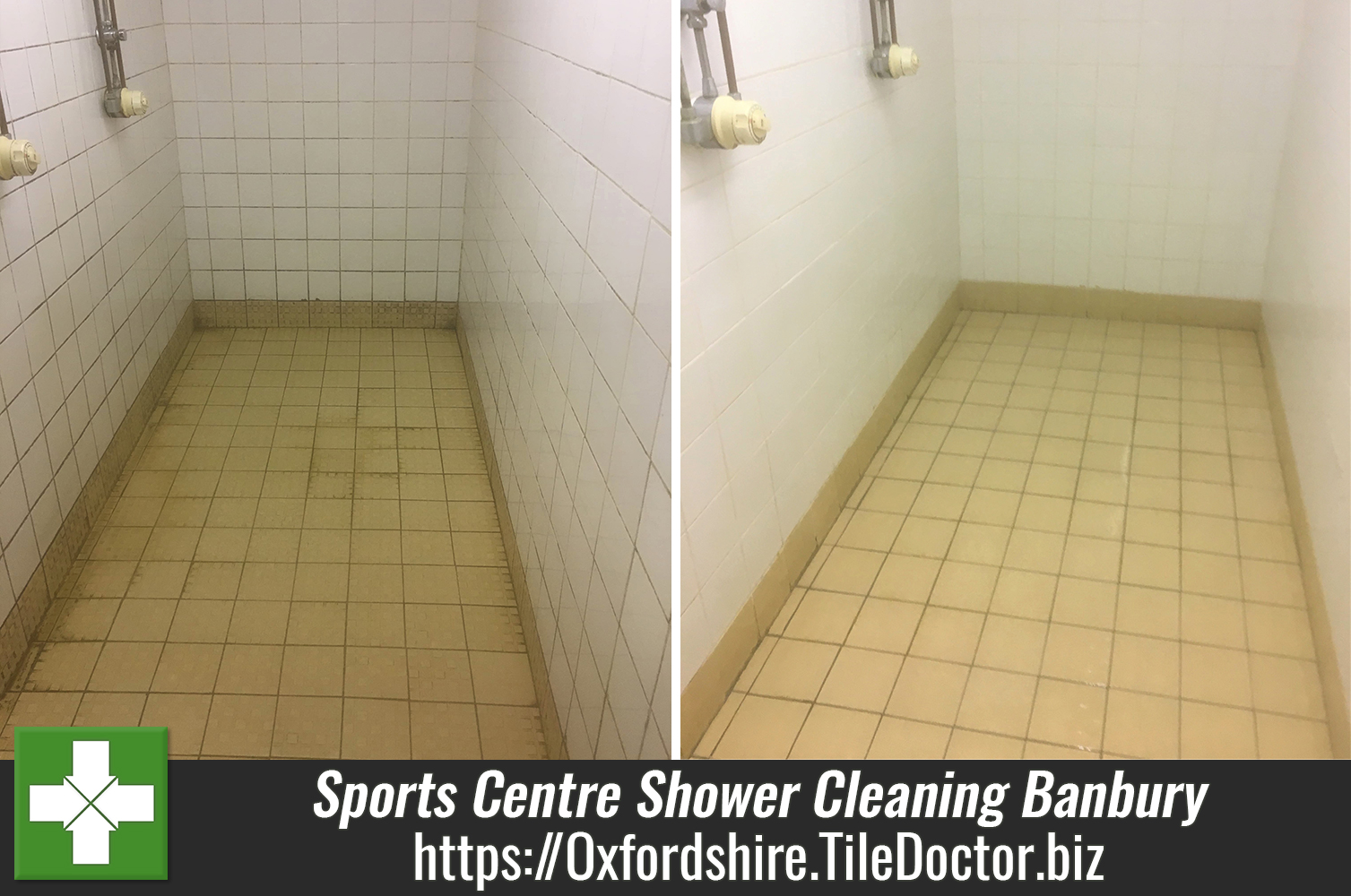 We were contacted by a Sports Centre in Banbury regarding the shower facilities in the changing rooms. The rough nature of the anti-slip ceramic tiles had been trapping dirt and it had a build-up of mould in some areas. In addition, the grout on the wall tiles was very discoloured. Obviously, they are very heavily used, so keeping them maintained is paramount to extending the life of the area and of course keeping the customers happy too!

With Sports Centres and Gym’s closed around the country this was the perfect time to get some maintenance work done so I when they called, I was happy to take a look. They accepted my quote and I booked them in for a deep clean. With the facility closed to the public I pretty much had the whole facility to myself so social distancing was not a problem.

Banbury is at the North end on Oxfordshire but fortunately the M40 runs right through it, so it doesn’t take long for me to reach it.

My first task was to give the shower tiles a clean with a strong dilution of Tile Doctor Pro-Clean which was sprayed onto the tile. It was left for ten minutes so it could have time to break down the dirt before being scrubbed in.

After inspecting the shower tile, I could see more work would be needed, so I followed this with an application of another Tile Doctor product called Duo Clean. Again, this was sprayed onto all the shower tile including the floor but this time I left it to soak in for an hour. I then scrubbed the walls and floors and rinsed with water. Tile Doctor Duo Clean is a fast, effective double action grout cleaner and mould remover. It cleans up grout and can also remove mould and blackspot from grout and silicone.

It was necessary to repeat the process as the tiles really were dirty, so I repeated the Tile Doctor Duo Clean process left for another hour, then scrubbed and rinsed. There were several shower areas to clean so I moved onto another shower whilst waiting for the first.

Ceramic tiles are sealed at the factory and so will not accept a sealer however grout is cementous and does benefit from being sealed so for this I recommend using an aerosol grout sealer as this is easy to apply.

Once dry the shower looked 100% cleaner and fresher than before unfortunately due to the Sports Centre being closed it will be a while before their customers will be able to appreciate my work.

Before leaving I advised the centre manager about the common issues with shower tiles and how best to maintain them in the future. I suggested the use of our Tile Doctor Aqua-Pro cleaner which is a pH neutral tile cleaner which could be used in addition to their existing cleaning regime. Hopefully, this information gets passed to the cleaning team who look after the building however it might be a while before they return.