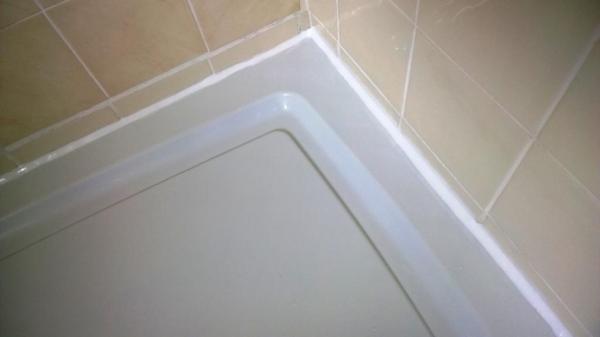 We were asked to look at a renovating a bathroom shower at a house at the The Green, near Millom which was rather useful as it is a short distance from my own home. Millom is a small town in South West Cumbria that actually dates to 1251 when it was given a market charter by King Henry III.

Given the location it wasn’t long before I was able to pop round and review the shower installation. It was clear that the shower needed some Tile Doctor TLC, with mould being a major issue in the silicone seal and grout near the base of the shower.

Mould thrives in warm damp environments such as shower cubicles and the problem can usually be traced to a lack of adequate ventilation. Improving the ventilation should resolve the problem permanently however if that’s not possible it can be controlled by regular use of products such as Tile Doctor Oxy-Pro shower cleaner or Tile Doctor Duo Clean which is a double action mould and grout cleaner. Other steps you can take include leaving the door open after a shower to improve cross ventilation and rinsing the shower down with cold water after a shower.

After reviewing the installation, we agreed on a price and I returned a few days later to carry out the work.

On return the first thing we did was thoroughly clean the tile and grout using Tile Doctor Oxy-Gel, our high performance alkaline cleaner and de-greaser in gel form making light work of cleaning vertical tiled surfaces. The gel was scrubbed into all tile and grout surfaces and left to dwell for five minutes then thoroughly rinsed down with water. This process was repeated until we were happy with the result.

The next stage was to remove the mould riddled silicon and small areas of damaged grout at the base of the shower unit. This took some time to achieve as the silicon was in a very poor state. Once all traces of the silicone were removed we cleaned the area with more Oxy-Gel and carefully rinsed all the residues to stop us having any problems when re-applying new silicone.

The shower tray was cleaned of debris and a heat gun was used to completely dry all areas.

Finally, with the mould removed it was clear that a few areas of grout were crumbling and needed replacing. The old grout was raked out and a new batch of mould resistant grout was prepared and applied. Whilst that was drying I also replaced the silicone sealant between the shower tray and tile using a mould resistant silicone.

We asked the customer to not use the shower for at least 24 hours and as can be seen in the photographs the shower appearance was vastly improved. The customer is very pleased commenting that “it looks like new”.

Source: Tile and Grout Cleaning and Restoration Service in Cumbria